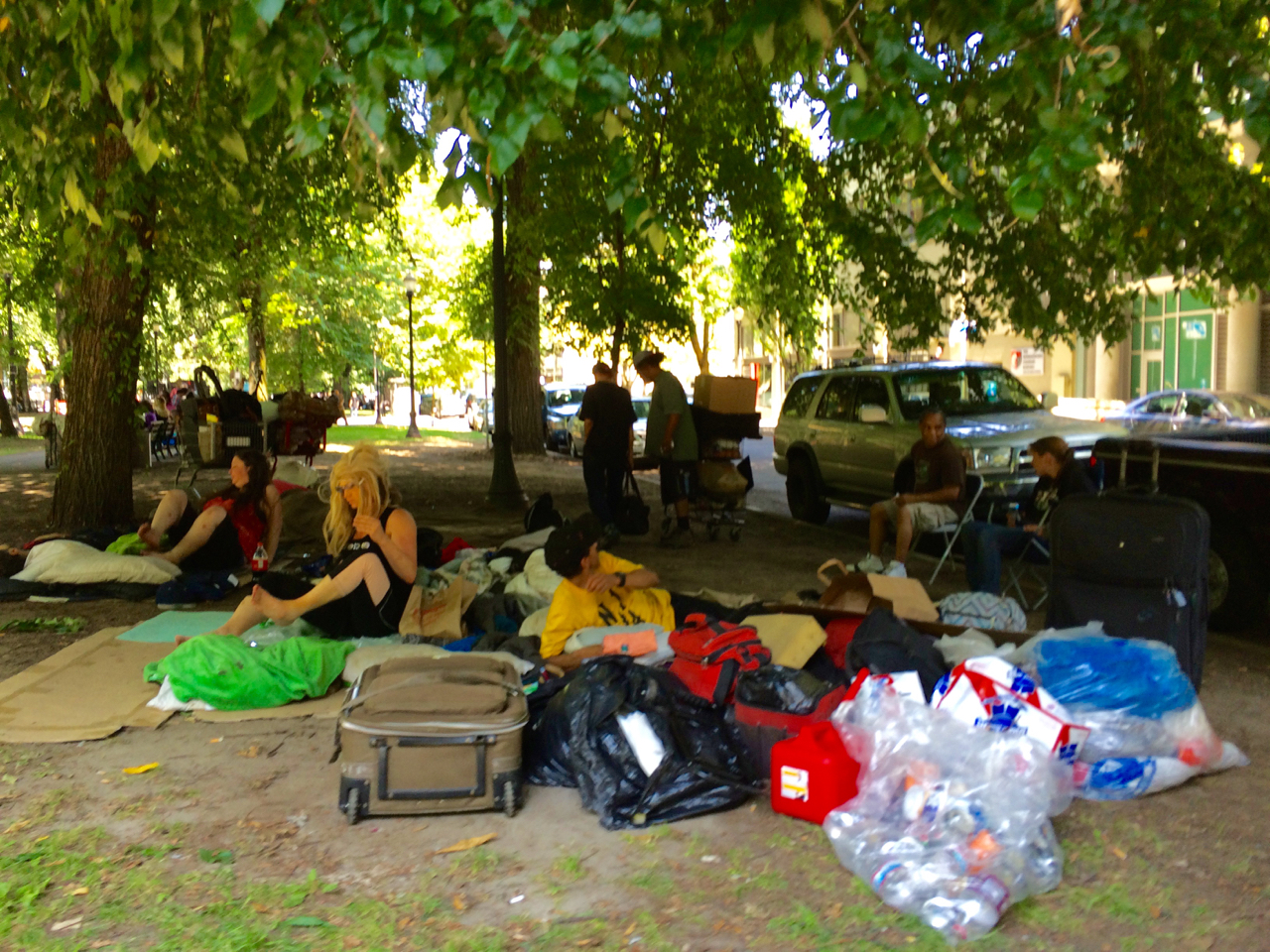 This proposed state law would turn our city and state parks into  camps. It even includes a provision that would make it illegal to remove personal belongings that people might leave behind.

Contact your city, county and state representatives and tell them that while homelessness is NOT a crime, our parks were NOT designed to shelter people in camps. Portland needs affordable housing. Warehousing people in our parks is not the answer.

The photo above was taken in the North Park Blocks ~ Summer August 2015.

PORTLAND, Ore. (KOIN) — A new bill aimed at decriminalizing homeless camping in public spaces has already drawn harsh criticism from locals who are worried about growing camps in their neighborhoods.

But supporters of House Bill 2215, otherwise known as the Oregon Right to Rest Act, say people should have the chance to sleep anywhere that isn’t private property.

“Why do we have to fight to sleep when it’s a human right?” homeless advocate Ibrahim Mubarak asked.

HB 2215 would allow homeless people to use public spaces freely “without discrimination and in time limitations that are based on housing status.”

It would also ensure those camping on public property wouldn’t be subject to “harassment, citation or arrest by law enforcement officers, public or private security personnel or employees of local governments.” If passed, the bill would make it nearly impossible for law enforcement to sweep camps.

Mubarak is in favor of HB 2215. He thinks homeless people in the area should be allowed to sleep in public spaces like city parks with little to no recourse.

“If they get housing for everybody, this problem wouldn’t exist,” he said.

While some opponents agree — and want to see the homeless better served — they say pop up encampments in parks near homes and schools aren’t the solution.

“It frees the city or the state from having to deal with the homelessness problem,” East Portland resident David Potts, who opposes the bill, said. “You really don’t have to create any housing for them if you’ve just made it state law that they can camp in any place.”

Another part of the bill that’s concerning to some has to do with protecting homeless people’s belongings. Residents are concerned that if people abandon their tents, shopping carts and other property, not much could be done to clean it up.

So far, HB 2215 has only been introduced in the House.

Update: Since we first posted this on April 26th, the Yelp listing has been pulled. But we can share this archived PDF Version 600kb

Last summer we posted some unsavory photos to make the point about how bad behavior was transforming our park into  #Camplandia.

Ridicule is a better way to go. Who knows, maybe the NY Times will notice?