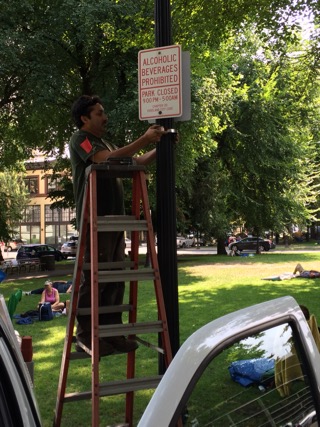 Note: This first came to us as a comment by lowestcommondenominator. It deserves to be a post

Having traveled both nationally and internationally in some pretty rough areas…and now settled in the Pearl for about 2 years, can this be compared to anything I’ve seen ….anywhere?    Nope!

Only in the Pearl. Only in Portland. And it’s getting worse every month I’m still here… what a shame the government doesn’t enforce the laws to create a safe parks and a livable city.

Panhandlers: Multi-shopping-cart beggars that compliment you on what you’re wearing, and then when no money is offered, they yell at you to, “suck their D**k”, or to “F**k-off”.

Litterbugs: They leave their mess behind day after day for someone else to pick up. Piles. Boxes they slept on. Food containers. Vomit. Whatever else their body relieves. It’s everywhere…not just the parks, but up and down the streets from the Park… Davis, Everett, Flanders, and Glisan.

Drugs dealers: Bags, needles, you name it, all for sale in the Park, and just a half block from the wonderful playground for the kids. How instructive for them…. Fast-exchange deals, new business ops, gone bad deals…with all the yelling, ruckus, and foul language. Either way, it’s routine…daily, uninterrupted by the law.

Porta-Potty? The naïve wonder … where do the homeless go to the bathroom? The Portland Loo? Why take the time? That’s a block or two away… Watch them pull down their pants or whip it out in broad daylight. Across from million dollar condos.The remains, with toilet paper…it’s all just in piles around the trees. No fear in being watched. No matter. It’s their territory. No one is stopping them.

Booze it up: I observing 2 drunks relieving themselves on the front doors of a high end condo a block away from the park, my instinct blurted “you’ve gotta be kidding me!” Oooops …My bad. This isn’t my Park. It’s theirs. The two responded with, “Mr….You gotta problem with us???…Yo, Mr….You gotta problem with us???… Then followed me yelling for 4 blocks. Scared for life…note to self…no words, no eye contact, never. This is their place, not mine.

Portland Pearl, the visitors paradise. And then there’s the Naito Parkway waterfront…. just more of the same, in spades. A should-be focus for locals and visitors…. instead, it’s now officially on the “NOT SAFE to be there list”. Sad. Such a beautiful area…lost to the un-ruled.

Portland, Mayor, City Council….wake up!!! And take back your city. The police enforce your law. Right now, they are handcuffed by your “leave them alone” directives. (I know, I’ve asked many of them…)