Portland deserves safe and livable streets and public spaces.
We believe that the issue isn’t housing status but behavior.
Nonetheless …

Survey: 34% of Portlanders may leave the city because of homelessness
KGW is tackling the issue with a recent survey and television feature: #TentCityUSA

KGW writes: Homelessness has such a significant impact on Portlanders’ daily lives that 34 percent are considering moving out of the city because of the issue, according to a new survey from DHM Research.

In addition, more than half of Portlanders are dissatisfied with the way the mayor and police bureau are addressing homelessness.

KGW commissioned the survey as part of a larger project about homeless tent camping in Portland. The project, Tent City, USA, launches Monday at 6 p.m. on KGW-TV and online at tentcitypdx.com.

DHM Research, a nonpartisan and independent research and consulting firm, surveyed 300 Portlanders representative of the city’s population, based on age, gender, race, education level and area in which they live. The survey has a margin of error of +/- 5.7 percent.

The results show that homelessness is highly visible. The average Portlander sees someone living in a tent and someone panhandling five times a week. Residents said they see drug paraphernalia and human waste or urine more than twice a week.

The sad truth is that the down trodden sleep on our streets with no treatment or protection and people are increasing dying. Our current policies are not working. We need more shelter beds and a consistent street policy to eradicate unregulated, unsanitary and unsafe street camping. Terminal One or Wapato – are real impactful solutions – big enough to make a measurable impact, giving people a roof and safe haven for sleep and nourishment. The argument that a large shelter concept would be warehousing homeless is the least of our worries when people are dying on our streets. ~ Michelle Cardinal

The number of homeless people who died in Multnomah County rose sharply in 2015—to 88, up from 56 the year before.

That’s the highest number of deaths since the county and the Street Roots newspaper began compiling the data in 2011 for a report entitled “Domicile Unknown.”

It’s may be a first, official indication that the number of homeless Portlanders has risen sharply since the last count in January 2015.

“We’re not getting people into housing at a quick enough pace to save the lives of people who are elderly and vulnerable,” says Bayer. “There are more people on the streets because we’re not moving people inside.”

Using the same method since 2011, the county has tallied the number of deaths investigated by the medical examiners’ office.

As in years’ past, roughly an equal number of homeless died from April through September and October through March.

Here’s a link to the report.

The folks who live and work around the North Park Blocks keep getting the cold shoulder from Portland’s Commissioner of Public Safety Steve Novick and his Bureau of Transportation.

For months we’ve documented how Bolt Bus turned a quiet historic park into a bus depot. We were startled when PBOT suggested we suck it up since drivers all over Portland are frustrated.

Cevero Gonzalez, constituent services coordinator for the Portland Bureau of Transportation, wrote us that “PBOT has not documented any increased safety impacts as a result of the Bolt Bus location,” … “Double parking and impatient motorists are problematic in all neighborhoods citywide.”

We invite Commissioner Novick and Mr Gonzalez to spend some time with us and watch the logjam and traffic violations created by Bolt Bus’ 40+ daily stops at NW Everett and Broadway.

Each Bolt Bus drops off up to 50 passengers (with baggage) who get picked up by double-parked drivers. Add to that another 50 passengers waiting on the sidewalk to board the next bus.  Without access to restrooms or cover from inclement weather they  seek shelter or a restroom by approaching businesses in the neighborhood.  Many huddle beneath overhangs in near-by buildings. At times more than 100 people (with baggage) block the sidewalk, making it nearly impossible for pedestrians to get through.

Read all about it in the Northwest Examiner.
Click headline below BoltBus Creates Logjam (August 2016)
2.5mb pdf 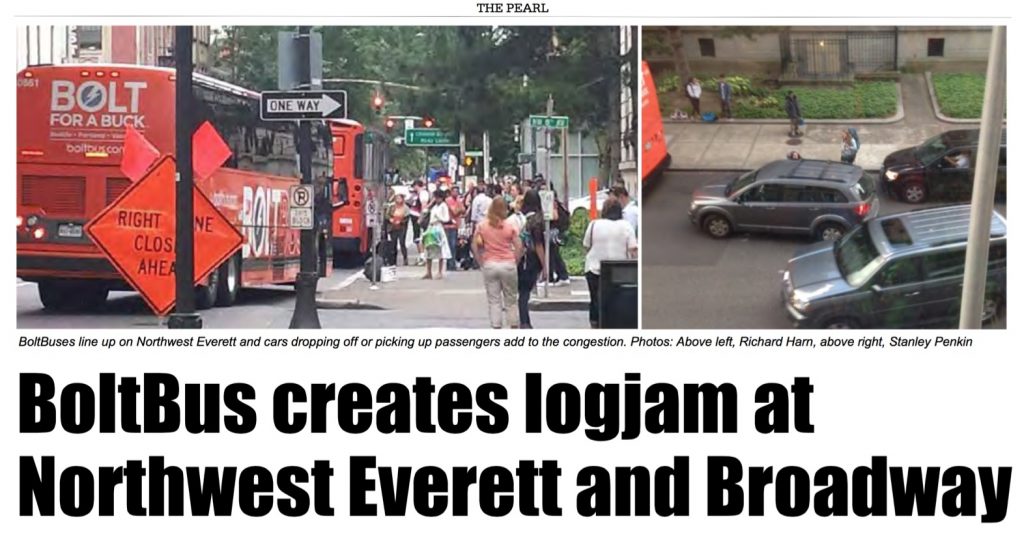 Bolt Bus, a subsidiary of Greyhound likes to market itself as the hip, low-cost future of bus travel. Earlier this year, Bolt moved into the North Park Block without warning. Rather than use their nearby Greyhound bus station (at NW 6th and Hoyt) Bolt turned the corner of NW Everett and 8th into a bus terminal without concern for it’s impact on the the park or neighborhood. We first  in February. See Terminal Chaos Forces Bolt Bus To Street Corner

To update the situation, here’s a reprint of a letter from Pearl District Neighborhood Association. 822KB pdf

The Pearl District Neighborhood Association (PDNA) brings forward the following Livability & Safety concerns regarding the Bolt Bus stop/depot that moved from SW Salmon St. to NW Everett St. at 8th Avenue; without any prior communication to the neighborhood. The Bolt Bus move to this block has had an immediate and negative impact on those living and working here.

We do not understand why Bolt would use a city street for a depot as there are no services commonly associated with a commuter bus terminal. Bolt Bus provides a coach service to destinations as far as Vancouver BC. Their customers travel with luggage – which necessitates being dropped off or picked up by car or taxi. Buses queue all day long, starting with the 6:30 AM pickup – which results in increased traffic starting sometime after 6AM and throughout the day. The Bolt Bus’s last drop off is scheduled for 10PM, although with delays their buses do sometime arrive much later. The increase in traffic is undeniable. The noise from the idling cars, the greetings and farewells, the honking of frustrated drivers who cannot proceed on Everett or surrounding streets due to double parking is ever present.

This bus depot should be relocated to Union Station which has a facility with seating, bathrooms, concessions, garbage receptacles, etc. or to a parking lot where at least the traffic concerns would be addressed or use the bus depot on NW 6th and Glisan.

Please advise as to next steps to work towards a resolution in this matter.

First off, our congrats to Ted Wheeler for sweeping the primary. Now it’s time to get down to work making Portland a better city for all. In case you don’t read Reddit, we wanted to repost this piece from r/Portland 18 May 2016

I’m a resident of Portland, a homeowner, and one of the many people who voted for you yesterday. I chose to cast my ballot for you because of your experience and technical credentials as our state’s treasurer, but also because of your work with Portland Mountain Rescue.

Like you, I love the mountains and the outdoors: biking, hiking, climbing, skiing. It’s why I’ve chosen to make my home here.

Over the last few years, I’ve slowly watched our urban green spaces be taken over by a population of people who reject the social contract and feed off our city like parasites. Open air drug use, public defecation, rampant property crime, intimidation of law abiding folk… the list goes on. The taxpayers and responsible citizens of this city are being held hostage in their own neighborhoods. I commute to work every day past growing camps of transients who have no respect for the rule of law, and no care for the city which they are polluting. Help us. Direct the police to help us. Just… do… something.

Our city cannot tolerate another four years of passive non-leadership on this issue. Our city cannot tolerate kicking the can or shifting blame. Fight for the taxpayers on this one. Help us reclaim our parks, multi use paths, and sidewalks. Create the conditions for us to enjoy our wonderful city without fear of being harassed, victimized, or worse. Be the hero Portland needs.