Remedy Wine Bar featured huge windows that overlooked the North Park Blocks. A park-side location should be an asset to a gracious wine bar. But not when it’s adjacent to a space that city neglect has turned into a de facto homeless encampment.

Portland Parks Commissioner Amanda Fritz lacks an appreciation for public perceptions of safe and livable spaces. In a KGW interview she stated “Every neighborhood in Portland will be asked to find a spot to put a homeless camp.”

We wonder what’s ahead for Portland in 2016. 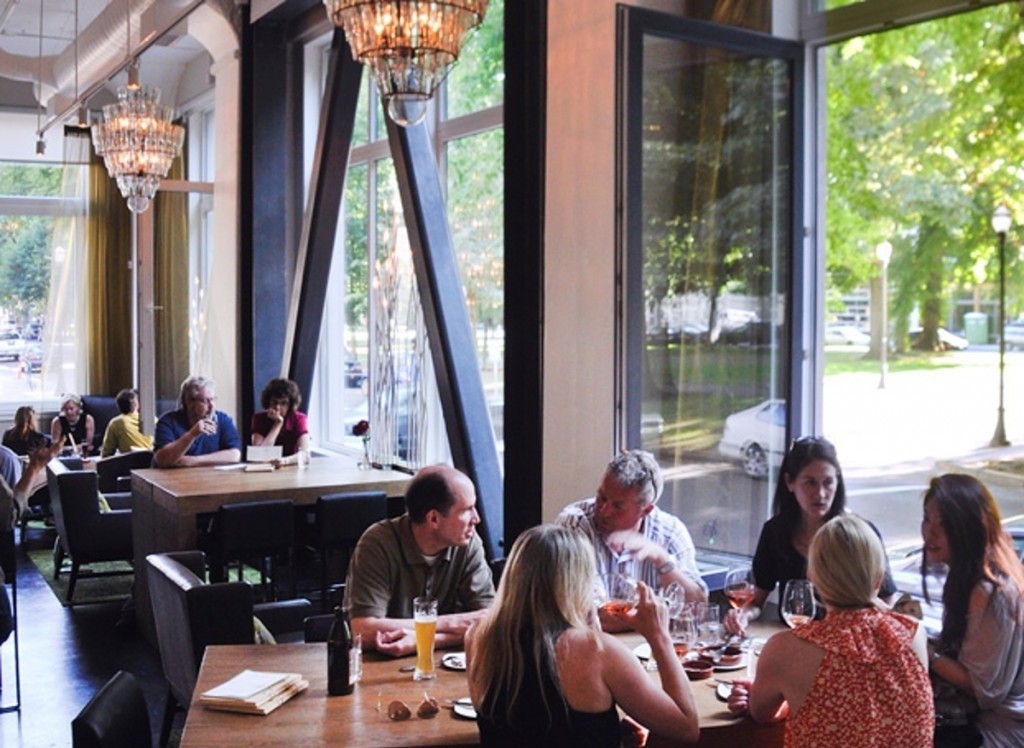 Pearl District wine bar Remedy, at the edge of the North Park Blocks on Broadway and Everett, is closing after three years.

Owner Michael Madigan says the problem is the neighbors.

Specifically, he believes that city sweeps of camps on the east side last June caused the houseless population to explode near his wine bar, and that the city has made a “conscious decision” not to solve the crime and drug use he says had become a problem in his neighborhood.

“One day last June when the city swept the inner Southeast,” he says, “Everybody showed up on the North Park Blocks. It was literally overnight.”

The city of Portland conducted a series of sweeps of east-side encampments beginning in May 2015.

“I counted 42 people between Everett and Flanders,” says Madigan, who is also owner of KitchenCru commissary space, CorksCru wine shop, and Bowery Bagels. “It had an immediate impact.”

Madigan says his business was down this summer by a significant margin year-over-year, after gains in the springtime.

He says that the problem was the crime he and his employees consistently observed near his wine bar, a second story space looking out on the park blocks that serves $15 wine flights, along with kale Caesar salad, and cheese and charcuterie plates including a $35 five-charcuterie platter.

Madigan says area hotels stopped sending customers to his neighborhood, and that the city was ineffectual in stopping drug use nearby, even when the city parked a police van outside the area. Remedy was named after a hundred-year-old pharmacy that once occupied the building.

“It was like the an episode of The Wire,” Madigan says of the North Park Blocks area. “As soon as the cops left, the drugs and the crime showed up again.”

He also says that people frequently urinated in the stairs that lead up to his wine bar.

“Every day those stairs are used as a latrine. There are public restrooms two blocks,” he says. “I remember asking people why. Why aren’t you going to those restrooms? They said, ‘The drug dealers won’t let us in.'”

Madigan says he talked to a police lieutenant about enforcing laws against camping, and smoking in parks, but that police were unable to do so.

“‘There’s a no smoking ordinance,'” Madigan says he told a police lieutenant. “‘Why aren’t you citing them for smoking?’ We were told that only park-rangers can cite people for park related ordinances.”

Local business owners took to documenting evidence of lawlessness on a website, northparkblocks.org. and formed an organization led by Michelle Cardinal—an owner of multiple properties and founder of boutique ad-firm R2C—to lobby the mayor and City Council.

“We took pictures of people having public sex in the parks,” he says. “One of our employees took a picture of a dealer injecting drugs into someone’s neck.”

In response to a video Cardinal produced, Mayor Hales and Commissioner Fritz visited the neighborhood, and the Oregonian published a series of articles documenting the “summer of lawlessness” in the park blocks. But Madigan says that this did not give him the results he needed to stay in the neighborhood.

He plans to re-open Remedy in an undisclosed space, after declining to renew his lease for an additional four years.

Glyph art cafe, also on the North Park Blocks, closed last September, citing similar concerns, although former owner Sandra Comstock said she believed that the situation had improved by the beginning of September. Madigan says the same, but that he thinks it will worsen again.

“When we moved in we knew the neighborhood was transitional,” he says. “We said all right, this will be a good thing to do.”

The last day of business at Remedy wine bar will be January 30.