PORTLAND, Ore. — Parents whose kids attend the Emerson School in North Park Blocks are joining in the chorus of concerned voices for all the crime happening there: People camping out, doing drugs, and having sex all in a school zone. And the area is home to Art in the Pearl, a huge art festival over Labor Day weekend.

It was a reunion after summer vacation on the playground outside the Emerson School. The annual school picnic means school is about to begin.

“This year is decidedly different than any other year,” said Principal Tara O’Neil who had gloves on, and was carrying a sharps container as we talked with her. “I’m walking around making sure there’s no needles on the playground or in the grass around the park.”

Emerson is right along the North Park Blocks in the Pearl District.

“Just the numbers of street campers of people who are out in the park sleeping, or living all day long — it’s ballooned, it’s more than doubled than from what I can see out our window,” said O’Neil.

The kids have noticed, too. Their parents told them to share.

“It’s kind of crazy how many people are around, and it seems kind of unsafe,” said Max Pettit, who is in middle school, and graduated from Emerson two years ago.

Neighbors collectively say they do not feel safe.

“This is a crime, nuisance, and quality of life issue. This is not a homeless issue,” said Fleming’s husband, Mic Fleming. “This is all new people, this is all new activity, this is a level we have never seen before.”

No one at City Hall would talk on camera, but we learned Portland park rangers are increasing visits at the park as frequently as possible, including an extra evening patrol. Over Labor Day weekend, when vendors have permits to set up shop for Art in the Pearl, police officers will work with park rangers to move the campers out.

Parents know that is just a short-term solution.

“We have a lot of people who can’t afford a roof over their head, or drug treatment, or good mental health counseling. I believe it’s really indicative of a much larger problem,” said an Emerson parent.

“I wanted to put out the information that The Emerson School is having our Back To School Picnic tonight, on the playground block, with ~100 families and children coming to play and take over the block for an hour or so. It begins at 6pm.

I had to send a notice to all our families to please bring chairs or plan on standing – the practice of laying out a blanket and eating picnic style on the ground was solidly discouraged by one of the park rangers, and I agree wholeheartedly—it’s just gross out there right now. Any of our neighbors are welcome to join us and just be part of a “take back the block” event for the hour (though you must have a tolerance for children running around)! I will be scanning the ground and playground for needles or any other safety hazards beginning at 5pm, if anyone wants to be available to help with that : ) —I’ll also have a name tag if anyone just wants to come and introduce themselves so we can make connections.

If you can help with attendance, it would be greatly appreciated!!!

They also wanted to let people know about their school schedule and daily use of the Park Blocks, in case that helps with any of our communications to the city. Their first day of school is Tuesday, Sept. 1. They have Daily P.E. in the park blocks from 10-10:30 EVERY MORNING – 150 students pour out into the park blocks for various large motor movement activities. They usually use the playground as well as grassy areas in a number of the blocks, starting with the “elephant block” and ending with the basket ball courts.

They intend to go out unless it’s really raining HARD. Their teachers walk the grass as needed to scoop dog poop each morning, and put cones around human (or questionable) waste. Then they use the playground for recess every day from 11:45-1:15, and then their After School program uses the playground from 3:15-4:15 when weather permits. 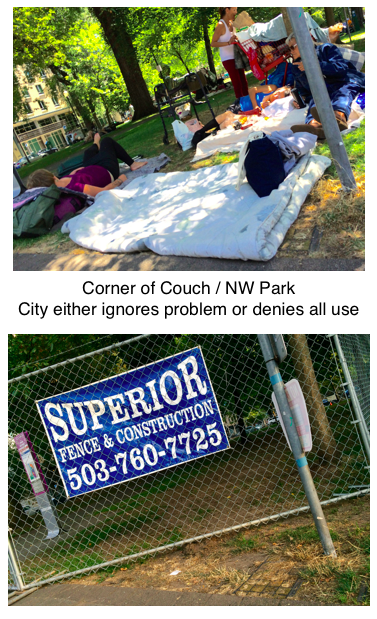