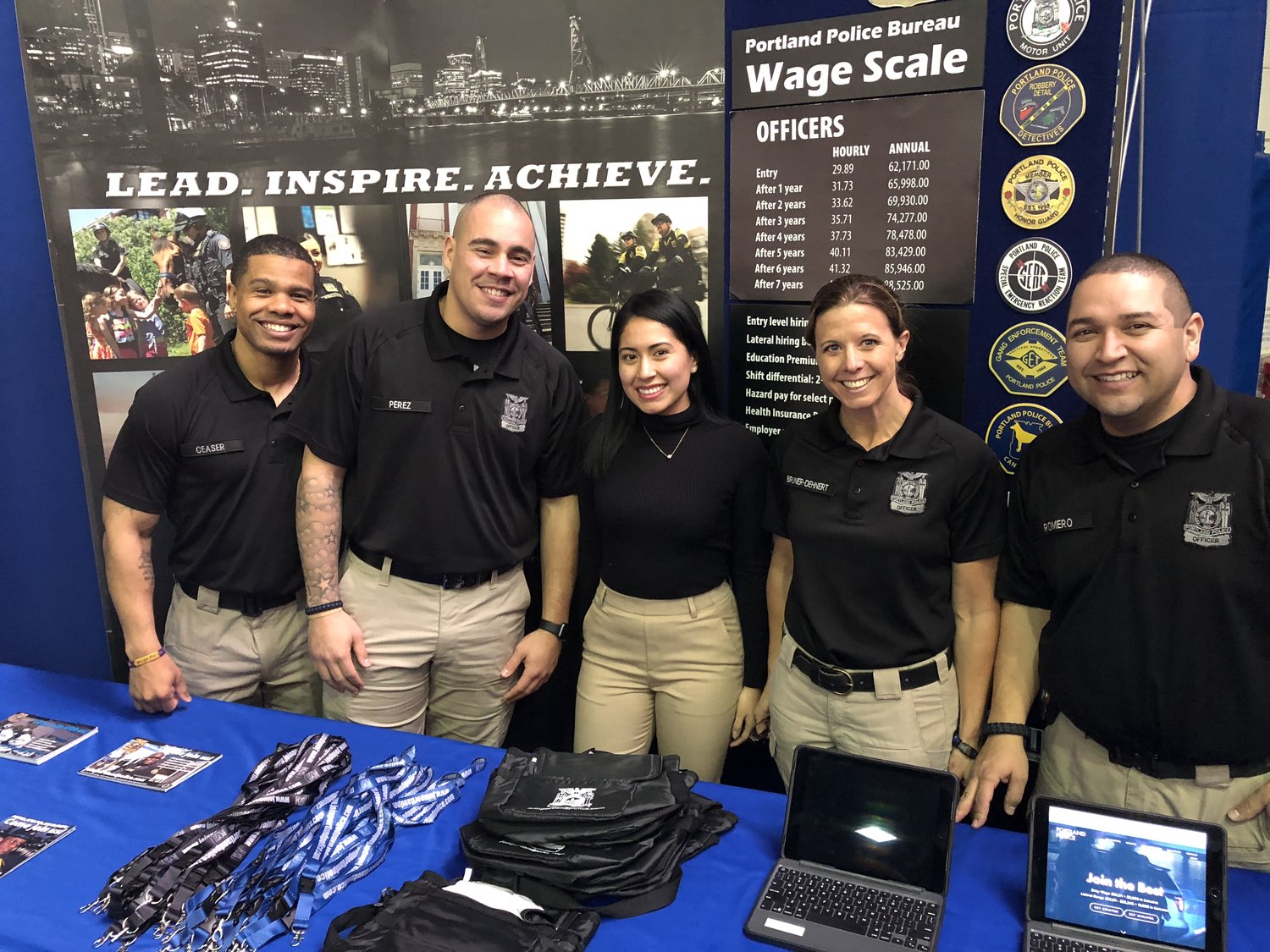 We support the Portland Police Bureau’s request of funds for 93 additional sworn officers, and nine additional non-sworn professional positions. These requests support the Mayor’s key priorities of increasing public safety and police accountability, maintaining the City’s critical infrastructure, and enhancing livability. The bureau’s requests for additional ongoing resources will advance the bureau’s mission and goals to provide 21st Century Policing services, to support organizational excellence and inclusion, and to rebuild police units so they can better deliver community policing to all residents.

Staffing within the PPB has been a critical issue for the bureau for many years, and there are several factors that impact this issue: recruitment and hiring, attrition and number of officers.

There are the fewer officers in the bureau as there were a decade ago, despite a 10 percent increase in Portland’s population. This request would increase the number of officer positions by approximately 10 percent–on par with Portland’s growth.

The Portland Police Bureau continues to face challenges in patrol staffing, which has led to declining response times. In the last five years, total 911 call volume has increased by over 22%. These calls include a 97% increase in stolen vehicle calls, 64% increase in unwanted persons calls and a 32% increase in disorder calls.

Without an increase in staffing, the response time for these calls will only grow, threatening the safety of all Portlanders.

We urge constituents with any public safety concerns to voice their support for this proposed budget.

Portland deserves safe and livable streets and public spaces.
We believe that the issue isn’t housing status but behavior.
Nonetheless …

Survey: 34% of Portlanders may leave the city because of homelessness
KGW is tackling the issue with a recent survey and television feature: #TentCityUSA

KGW writes: Homelessness has such a significant impact on Portlanders’ daily lives that 34 percent are considering moving out of the city because of the issue, according to a new survey from DHM Research.

In addition, more than half of Portlanders are dissatisfied with the way the mayor and police bureau are addressing homelessness.

KGW commissioned the survey as part of a larger project about homeless tent camping in Portland. The project, Tent City, USA, launches Monday at 6 p.m. on KGW-TV and online at tentcitypdx.com.

DHM Research, a nonpartisan and independent research and consulting firm, surveyed 300 Portlanders representative of the city’s population, based on age, gender, race, education level and area in which they live. The survey has a margin of error of +/- 5.7 percent.

The results show that homelessness is highly visible. The average Portlander sees someone living in a tent and someone panhandling five times a week. Residents said they see drug paraphernalia and human waste or urine more than twice a week. 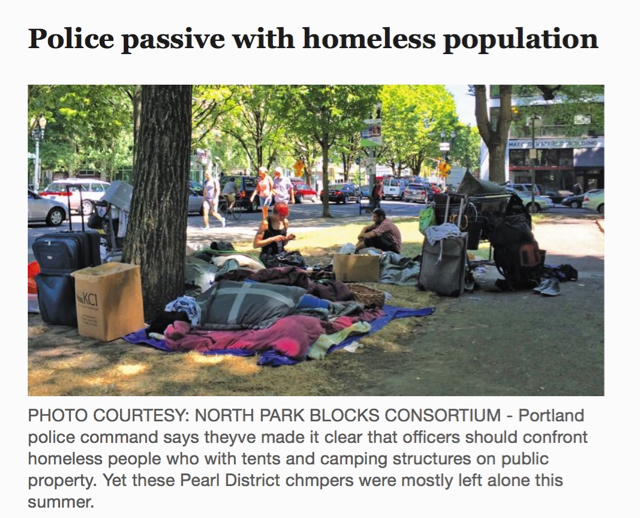 “We have never, ever, by any leadership, been given clear direction on how to deal with the homeless population on sidewalks and in parks,” Turner says. “Without clear direction, cops don’t know what the city wants.” END_OF_DOCUMENT_TOKEN_TO_BE_REPLACED

One of the biggest questions we run into is “why isn’t law enforcement enforcing the law”. This is a great question but, also a complicated one. Herein lies the conundrum of law and policy. The State of Oregon’s legislature writes state laws. Local city government officials that “we” vote for and put into office set forth policy. Sometimes the law and policy collide when city officials take it upon themselves to set policy which overrides the law.

An example of this can be seen with state law prohibiting smoking in public places which took effect July 1, 2015. While the state law is pretty clear Portland City Council deemed the law unenforceable in their opinion and Amanda Fritz was quoted to say ‘peer pressure,’ not police, will enforce Portland policy. Therefore you will not see a reduction or impact whatsoever on smoking of any kind in public parks nor around play grounds like the one outside of Emerson School, nor will you see a reduction in the cigarette butts left behind.

Similar situations of policy trumping law would be site lie and inner city camping which are both illegal under State of Oregon Law. This particular issue was addressed in the Portland Tribune this week. City Hall has failed to give clear direction to police on what they can or cannot do.

“Assistant Police Chief Bob Day says he has made it clear to officers, for instance, that tents on public property should not be allowed. “We’ve talked about that on multiple occasions,” he says. However in recent discussions with Chief Day – he said “we can and should report illegal camping. That said, the police have to jump through several hoops to get people to move along – it may take 24 – 48 hours. And with understaffing this is not huge priority, but it can be done.

Therefore squeaky wheel gets the grease.” So, let’s get squeaking by calling non-emergency police to remove people from side walk blockage and from door ways. Tents, forts, sleeping bags are all illegal.

Additionally here are other state laws that we as a tax paying citizen have the right to demand be enforced:

1. Drug Free (School) Zones Under Oregon law. Under ORS 475.904 it is a Class A felony “for any person to manufacture or deliver a schedule I, II or III controlled substance within 1,000 feet of the real property comprising a public or private elementary, secondary or career school attended primarily by minors.”

All that has to be shown to obtain a conviction is that the person had more drugs on them then for personal use. That is enough to show an “intent to deliver.” State v. Rodriguez-Barrera, 213 Or. App. 56, 60, 159 P.3d 1201, 1203 (2007) (“possession of a controlled substance in a quantity that is inconsistent with personal use, when accompanied by possession of materials commonly associated with delivery, is sufficient to establish possession with intent to deliver the contr olled substance.”)

2. Dog attack – Oregon law. ORS 609.090 allows the police to impound a dog if it is a “pubic nuisance,” which includes a dog that is deemed to be a “potentially dangerous dog” further defined as a dog that: . . . “Without provocation and while not on premises from which the keeper may lawfully exclude others, inflicts physical injury on . . . a domestic animal . . . .” ORS 609.035(5).

3. Illegal camping. There are no Oregon or federal cases stating that Portland’s “no camping” ordinance is unconstitutional. To the contrary, in Anderson v. City of Portland, No. CIV. 08-1447-AA, 2011 WL 6130598, at *4 (D. Or. Dec. 7, 2011), federal Judge Anna Brown rejected a host of constitutional arguments against the ordinance

This summer our voices were heard by city hall and they took some action. The cooler weather has moved in and we are seeing less drifters and traveling gangs. But, this is the time when we need to push and make noise. If we don’t we run the risk of having another summer next year whereby the North Park Blocks are over-run and occupied by a street dwelling criminal element bent on affecting the quality of life in and around the park.

The only way that we will impact lasting change is by keeping our voices be heard. If we see any crime being committed it is our obligation as good neighbors to report it. If you are confused, which many are, by who to call when feel free to download the North Park Blocks Resource Sheet here  or consider the following:

If you witness or are subject to illegal behavior, please do not confront the perpetrator(s). PLEASE REPORT IT.

Additionally, sign up to testify at the City Council meetings. Simply email Karla Moore via Karla.Moore-Love@portlandoregon.gov and let her know when you would like to provide the public testimony. City Council meetings are held on Wednesdays. Communications are the first item on the official agenda and they start at 9:30 a.m. (You may also fax at 503-823-4571 or call 503-823-4086 for more information). 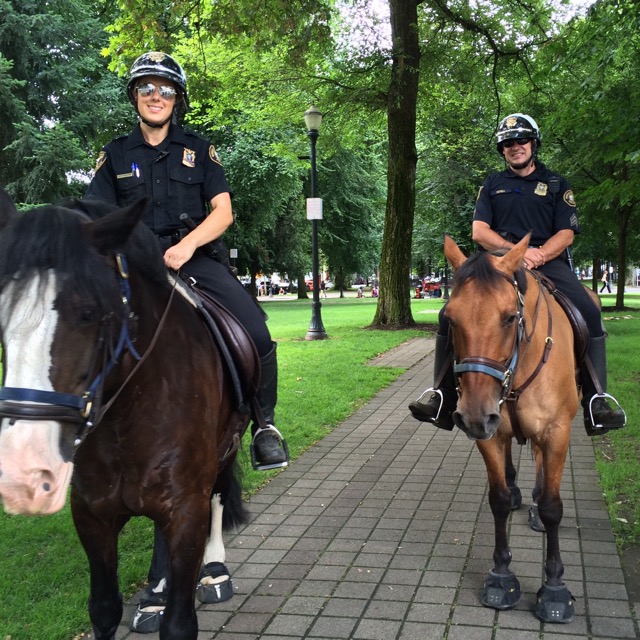